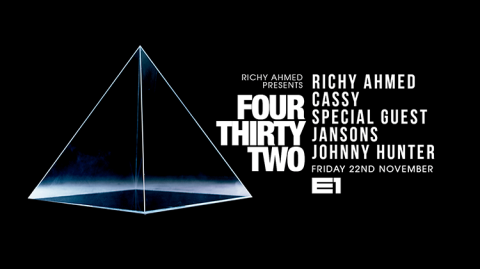 Within the modern house soundscape, there are few artists as prevalent and well-liked as Richy Ahmed. From honing his craft on Hot Creations to becoming a regular in the international scene, the launch of Four Thirty Two marked a pivotal milestone in his career. In the four years since its inception, Ejeca, Man Power and Jansons have all found a home on the imprint, showcasing a reflective and contemporary house sound.

The upcoming label showcase continues in this vein, with a lineup that caters for electronic music fans from all ends of the spectrum. We are delighted to welcome the return of Richy Ahmed’s: Four Thirty Two.

Representing the imprint will be a tastefully curated set of DJs. Founder of Kwench records and a leading light for female DJs across the globe, Cassy will be debuting in our London home. A true digger, with a sizeable record collection to match, her performances are as diverse as they are exciting.

Label regular Jansons will also be returning to our space, having carved out a signature identity in the house and techno soundscape. Alongside Richy Ahmed, the duo performs and produce as LOVEHRTZ. While Jansons solo career has been similarly successful with standout releases on Hot Since 82’s Knee Deep in Sound and Yousef’s Circus Recordings.

As one-third of the recently formed Superlux trio, Johnny Hunter rounds off the billing. A regular on the UK DJ circuit, there are few as experienced as him.