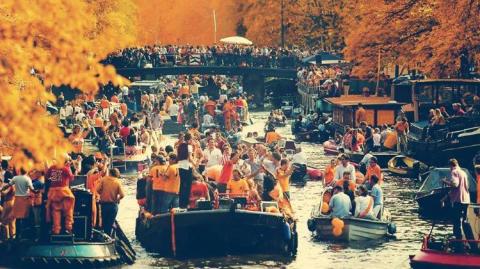 ATTEND: & WIN spots on a canal boat!
TAG & INVITE your friends for this amazing event!

On King’s Day there are celebrations throughout the Netherlands. However, the most popular destination is Amsterdam where an average of 700.000 visitors join the 822.000+ locals in the world’s largest street party.

When it comes to parties, Amsterdam's annual celebration of their monarch's birthday is the ultimate Dutch treat. In a city known for its "anything goes" party vibe, this annual event is the wildest 24 hours of the year. While the laws are more than tolerant the other 364 days, rules practically don't exist on this day as police are strictly forbidden to intervene in the festivities. It's not as if many real crimes occur in the Netherlands, but the cops sure won't shut down your party—whether you're selling your grandma's record collection or dancing in the streets wearing her vintage orange tutu. It's all in the name of a good time and between the costumes, clubs, canals and street parties, the whole city is hell­-bent on having fun, painting the town orange and celebrating all things distinctly Dutch.

Why orange? The flag of the Netherlands is red, white and blue, but orange is the color of the royal family and most everyone embraces this bright, happy color, welcome after a long, gray winter. Even the flags are adorned with a mini­-flag of orange.